Coming Soon!
The premiere of a new evening length piece – Ghost Lines – by my friend and collaborator Cori Olinghouse.
Ghost Lines incorporates live performance and film with costume design by me! 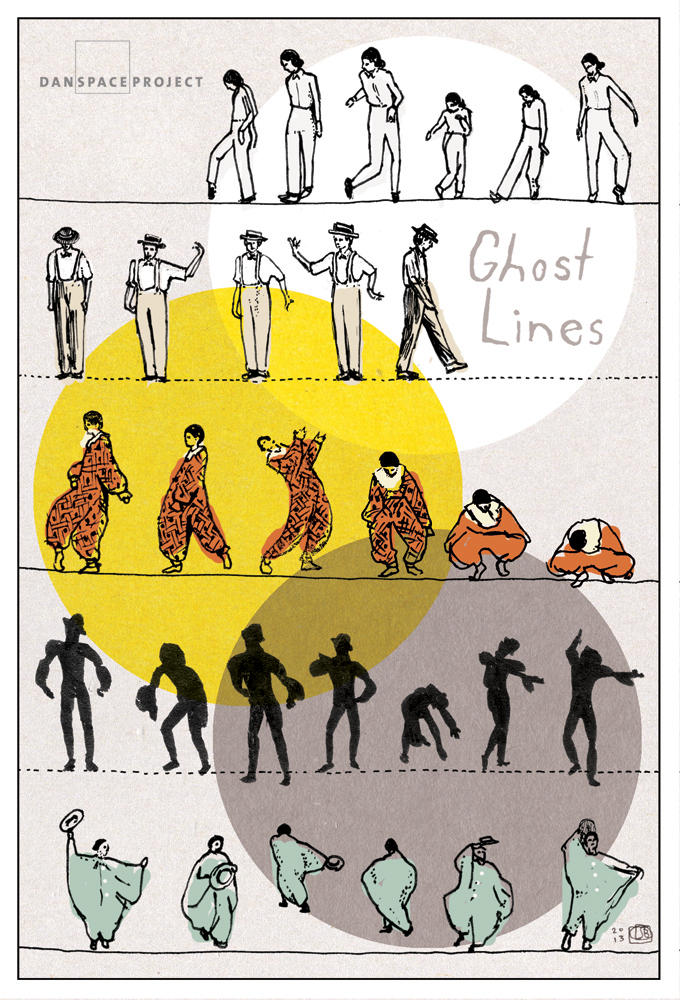 As part of the evening, Olinghouse and film artist, Shona Masarin merge creative processes with a 16mm black & white film that uses traditional animation techniques, hand processing, chemical experiments, collage, painting, and drawing. In the film, Olinghouse acts as a medium, conjuring imagery from our collective unconscious, allowing a series of imagined spaces, forms, characters, and personalities to drift through her body, take form, and dissolve again. Drawn to the mechanics of the medium as it relates to perception, kinetics, and optical illusion, they look for rhythms and startling chance compositions that confuse, seduce, and assault the senses. 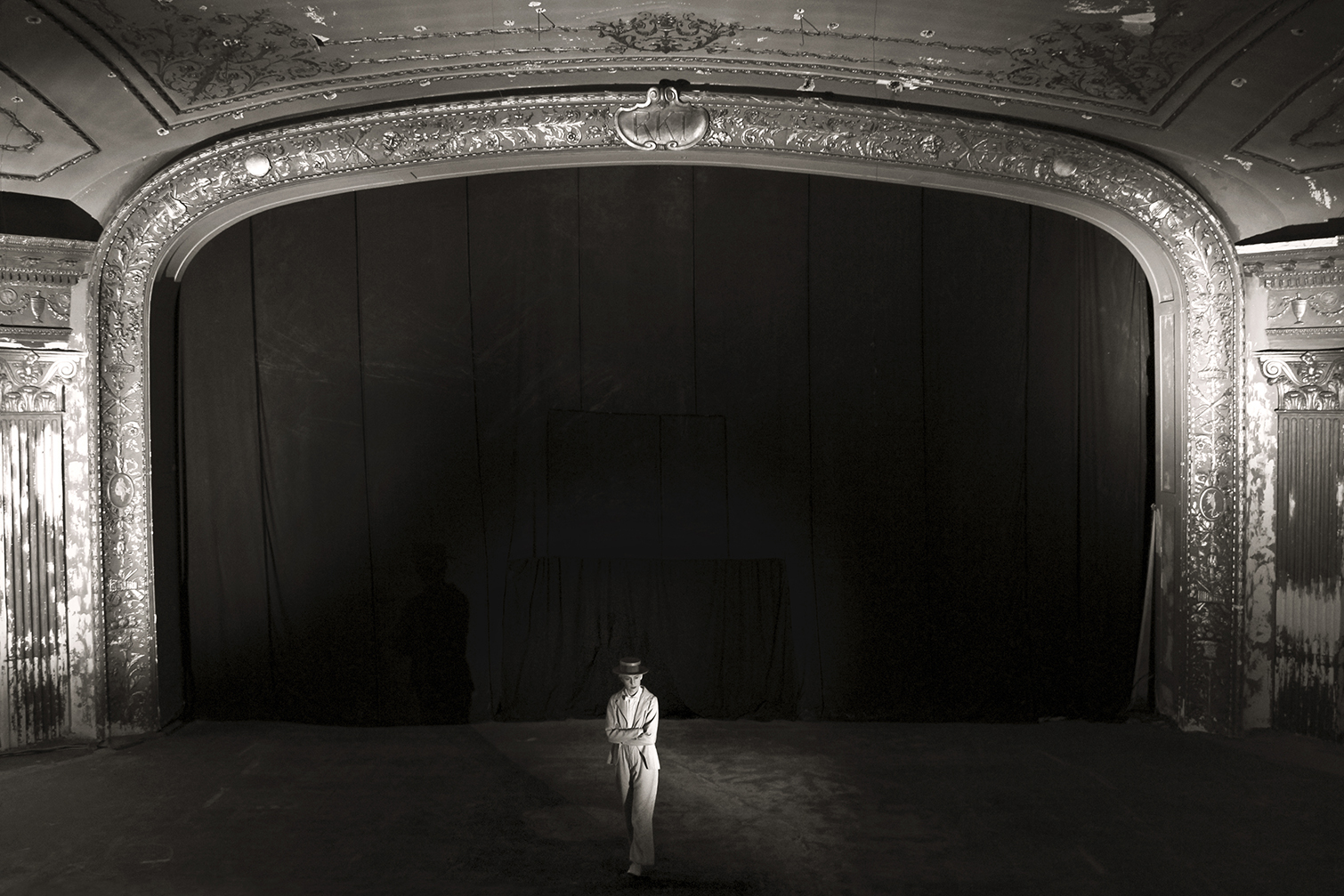 Photograph from the set of Ghost Lines    photo: Andytoad 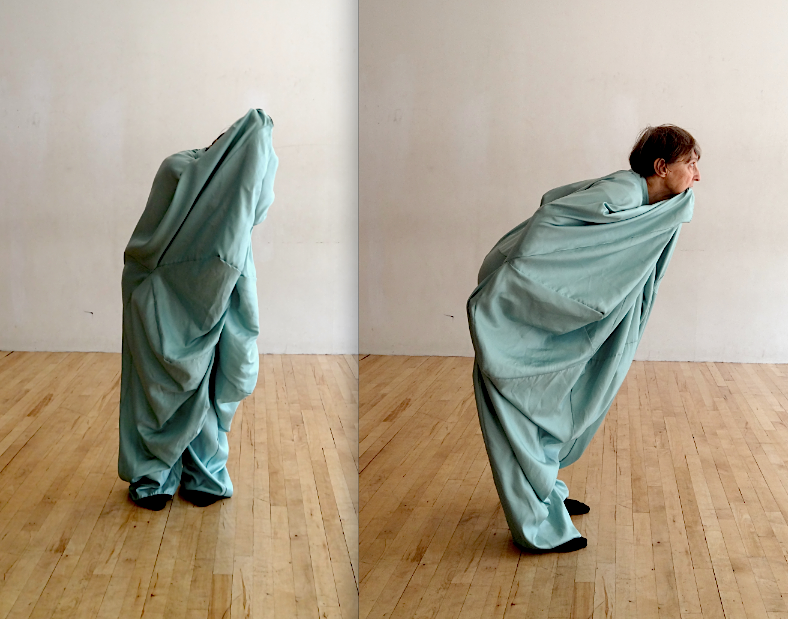 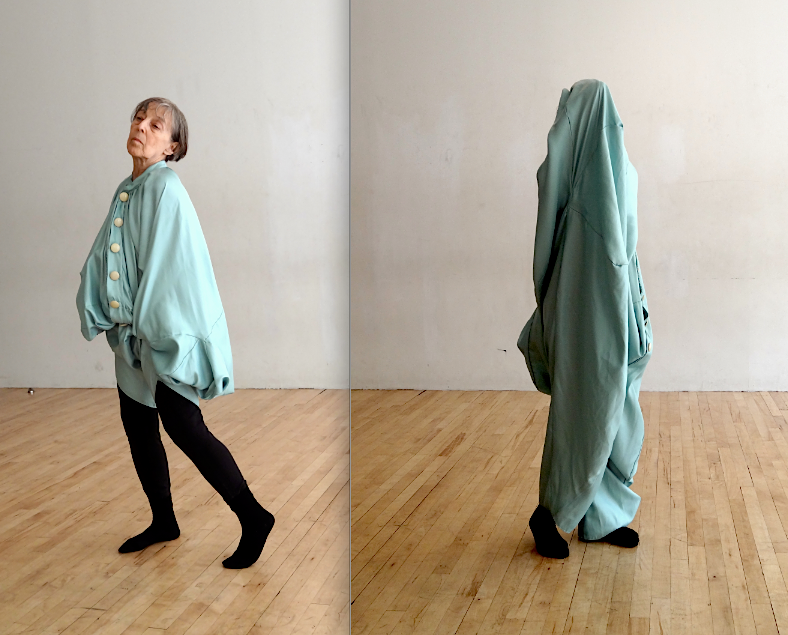 Debuting some new costumes at Movement Research on June 4th! 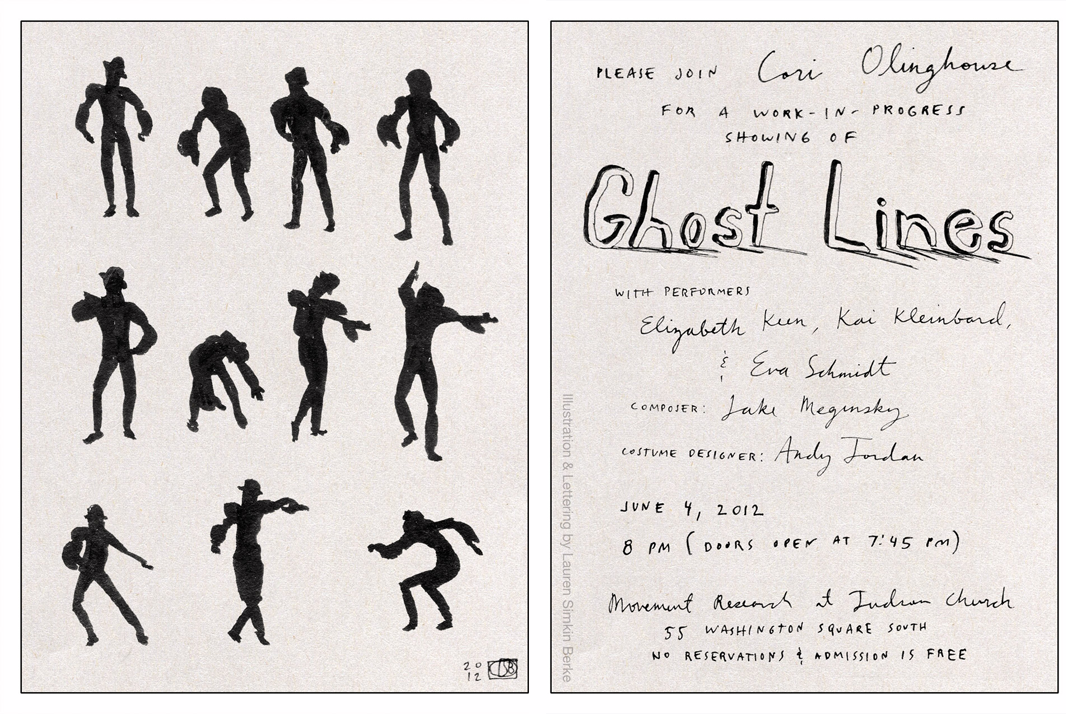 It’s been busy around here.

I crammed a lot into the end of October (a little too much I’m over worked and under the weather).

On October 21st I participated in an performance event at the Location One Gallery.

The evening was curated by my friend David Quinn who asked various people from around town involved in the performing arts to participate in a fundraising event for Location One. I took it as an opportunity to flesh out some ideas that I’d been kicking around in my head. The result was three short solo performances in which I performed, choreographed and designed (costumes and projections.) All of this was only possible because of the amazing people in my life who agreed to work with me on the project – My artist muses/collaborators – Cori Olinghouse, Christopher Williams and Mike Andrews. Composer Derek Piotr built gorgeous soundscapes for each of the three chapters. The fantastic costume and knitting skills of Craig Hunter and Kit Lee helped me realize the looks for the pieces with some rad accessories by Sam McFadden. And generous friends gave of their time to form the video projections – Grant Worth as editor and performers Ananda Keator, Betty Chen, Felipe Vasquez, Kit Lee, Nathan Crislip, Raja Kelly, and Will Penrose. Thank you, Thank you, Thank you. You all amaze me.

Unfortunately because I was quite distracted I didn’t arrange to have someone document the performances …  I plan to re-stage these pieces for documentation. More on this project soon. In the meantime more info can be read here.

Below is an excerpt from the video projection, which acted as my set, that ran during the third sequence – “Raven”. 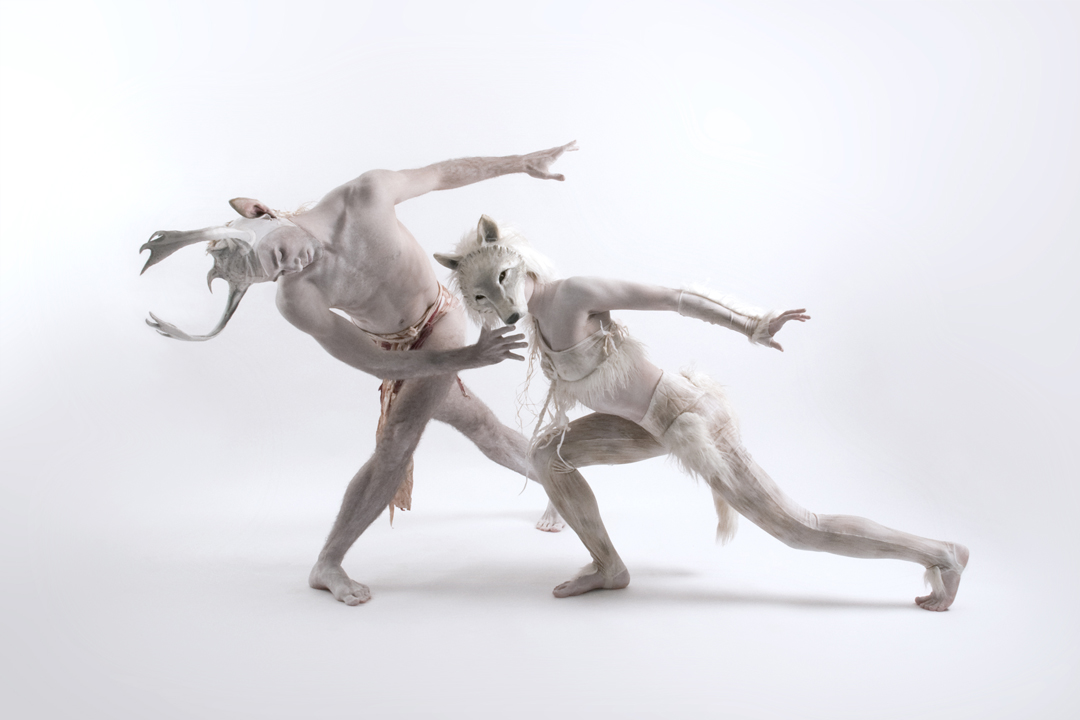 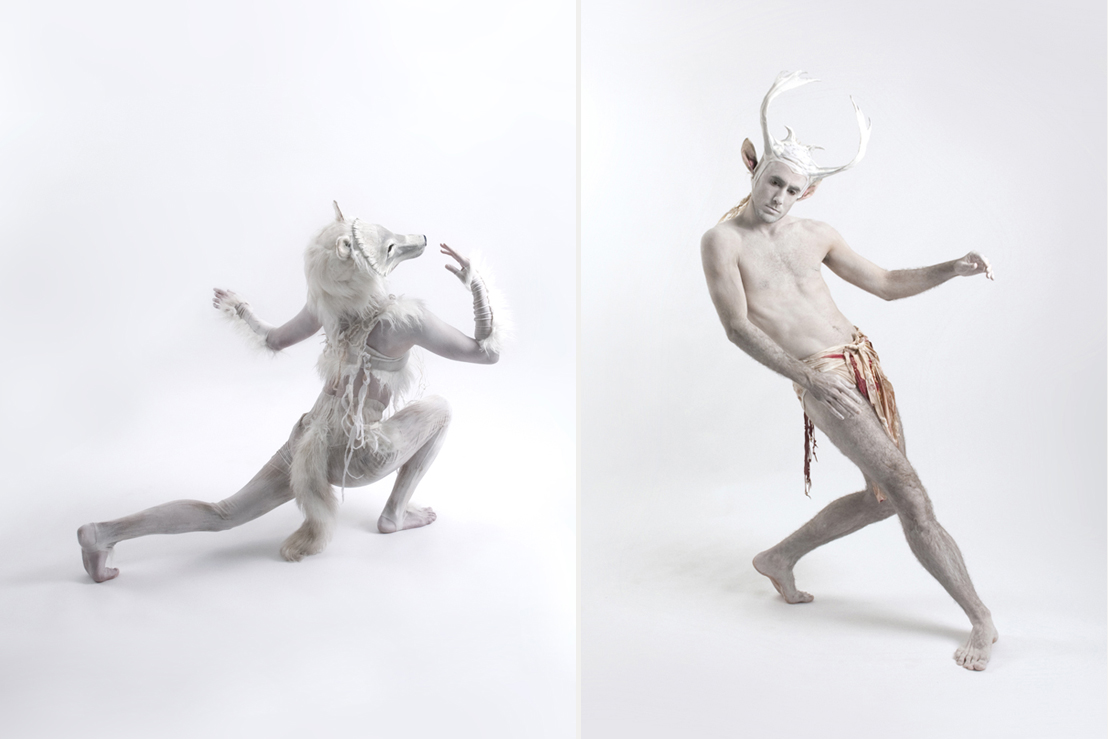 Then of course it was Halloween, and it’s hard for me to just brush that off. A delightfully successful collaboration with the exquisite Jordan Isadore led to a Dia de los Muertos couple (all paper and and paint). ¡Guapísimo! 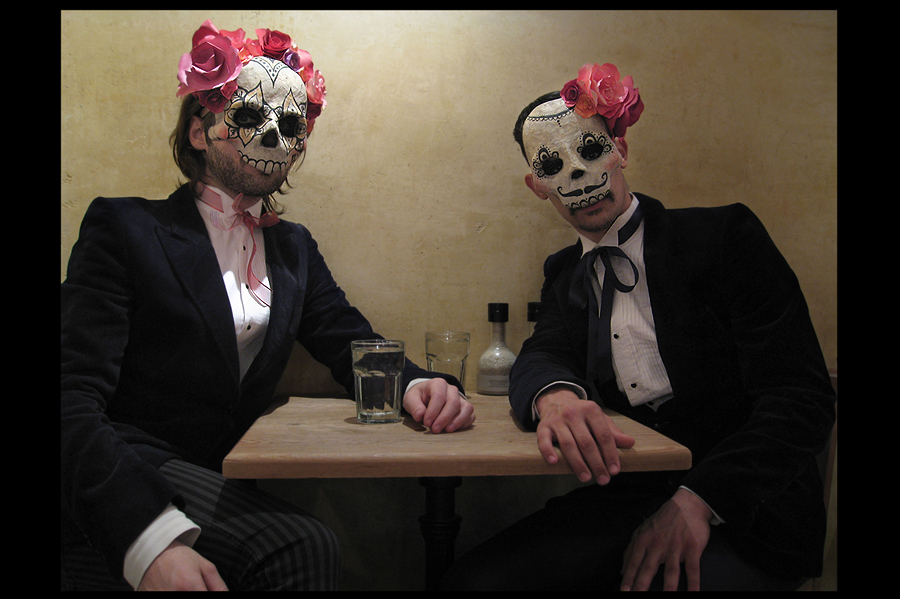 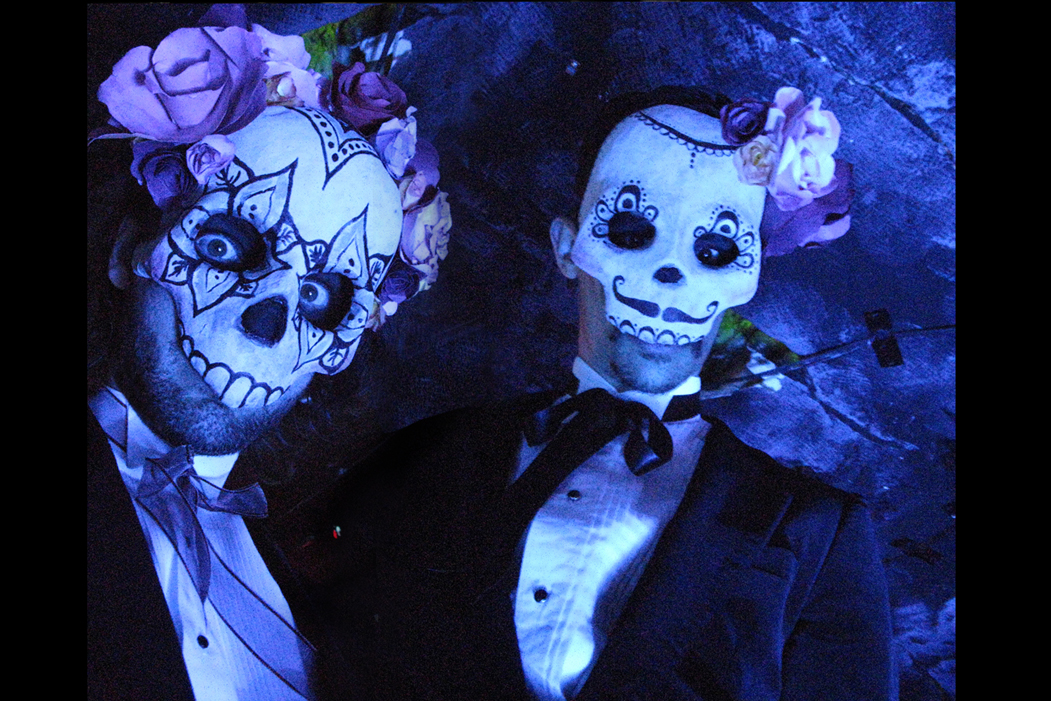 In the moments between the aforementioned projects I tried to put in as much time as I could at my freelance job at Izquierdo Studio (which is always busy at Halloween). Martin Izquierdo has designed Heidi Klum’s Halloween costume for years and this year was no exception. Actually this year he designed her two! The Skinless Woman and The Missing Link between man and ape. 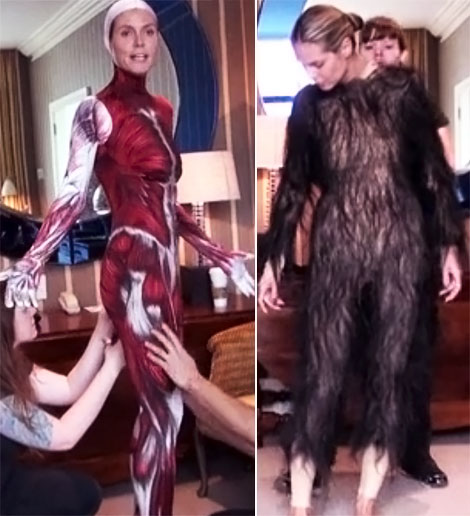 Some exciting images from a new project with Cori Olinghouse, Ghost Lines.
…looking for new ways to rehearse and understand what we’re creating…

October was a busy month. Lots of costumes flying around. But that’s kind of my thing…

Not only was I building looks for many people and helping friends with their Halloween costumes, I myself was playing dress up too.  A good friend sent me this image and I think it’s an appropriate metaphor for what happened to me late in the month:

Many people  I talk to in the field of costume design say that they never make anything for themselves, that they spend too much time making for others that they have no interest in making for themselves. Somehow I still find a thrill in transforming myself into something else. And I hope I can hold on to this. But it takes work. And sometimes I work too much. (Actually I always work too much.)  And sometimes I’m a broke down mess. (Not always!)

A lot of time was spent working with other artists at Izquierdo Studio on robotic armor for Heidi Klum. Martin Izquierdo designed the amazing look, complete with built in stilts and chrome breasts. I respect Heidi’s desire to have a unique custom built costume every year for her Halloween party. I’d like to see a movement towards a more couture halloween.

This photo was taken during a fitting at the studio.

For Halloween weekend I had big plans to be a skeletal bat. But Saturday night hit and I wasn’t done! Luckily there are lots of bits and pieces from past projects circulating in my world. With a borrow here and some scraps from there I became a llama. Which paired well with my friend Matthew’s creepy monkey costume. (Yikes!)

And for Sunday night, actual Halloween, I finished up my bat skeleton just in time to head out. ( A friend actually sewed me into the suit on the subway…)

This photo is from a costume fitting for choreographer Cori Olinghouse. Cori asked me to design looks for a super interesting piece called The Animal Suite: Experiments in Vaudeville and Shapeshifting. The piece brings together movement from vogueing, vaudeville and silent clowning, which Cori has woven together exploring the concept of eccentric dance. After seeing the dancer move in his costumes I know we are onto something good!

Soon I’m starting work on some new costumes for my friend and collaborator (and epic-maker) Christopher Williams. We’re taking the first steps in an an exciting new project, an opera based on medieval Welsh mythology. I’ve read an early draft of the libretto that Christopher has written and it’s incredible. (!)

An excerpt will be shown in February at the Joyce theater…  Photos from our last collaboration can be seen HERE.

Working away on a set of paper bear heads for choreographer Cori Olinghouse. They will debut in a new dance piece this coming spring. I’m having fun working with Cori, collaborating with her on her experiments in vaudeville and shapeshifting.  I’ve always had a thing for human animal transformations.

I love this still from a video of Cori creating movement. One of the costume we’ve created (pictured) is a deconstructed backless button down shirt, a boater hat, and some early 1900’s-ish baggy trousers. Various other clothing bits come on an off, in and out  – and there is also an opera glove and cane in the mix as well. More as it develops.

My friend Cori Olinghouse and I continue to work on a project together, a series of experiments in vaudeville and shapeshifting.  Our project is a work in progress so I can’t say much yet. Video from our first showing, The Animal Suite, can be seen here.  And I will share this sketch…. 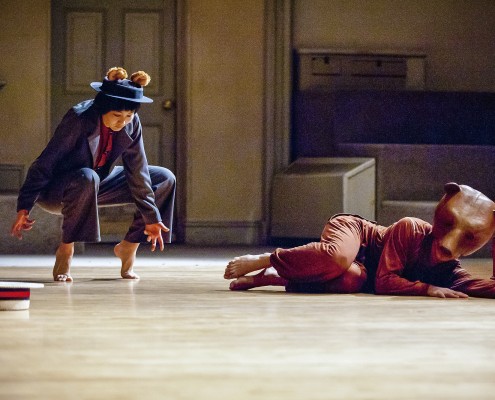